It’s official – Friday night has been declared Pizza Night in the Kim-and-Hector kitchen.  But when I say pizza, I’m not talking about 2,000-calorie mounds of dough and cheese that make you feel guilty and slightly nauseous the next day; I’m talking about a crisp homemade crust covered with roasted sweet potatoes and red onions, mozzarella cheese and crunchy balsamic kale.  This is not Pizza Hut pizza.  This is so much better. 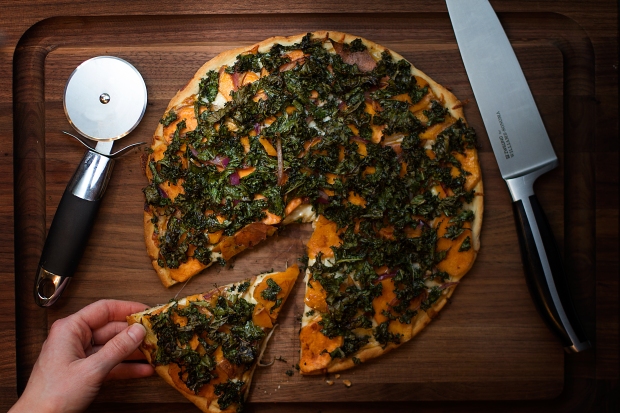 So here’s how Pizza Night works: every week we choose a different kind of pizza, based around an ingredient we want to try or a neat recipe we found.  Last week we chose kale because I got a giant bunch in my bi-weekly produce box, and the search for a unique recipe resulted in this gem from Two Peas and Their Pod: Sweet Potato Kale Pizza with Rosemary and Red Onion.

Seeing as this is the first time I’ve posted a recipe using kale, I have to add a note here: it took me forever to find ways I actually like kale.  I tried kale chips, steaming, frying, salad (at which point I also discovered that just about anything tastes pretty good when it’s covered in Caesar salad dressing and Parmesan cheese)…and I got sick of everyone telling me to try kale chips.  END_OF_DOCUMENT_TOKEN_TO_BE_REPLACED